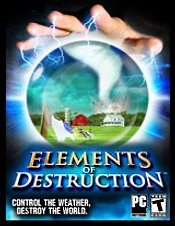 You are Dr. Edgar Herbert - forced into retirement, humiliated and embittered by a corporate scheme to gain control of your valuable weather controlling patents Use your inventions to discharge tornadoes, lightning, earthquakes and many other forces of nature to exact revenge on the scheming company - AND THE WORLD!