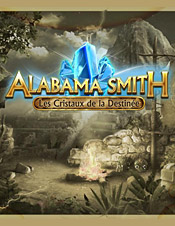 Alabama Smith in the Quest of Fate (Francais)

Ever since Alabama Smith barely escaped with his life after going back in time to witness the destruction of Pompeii, he's been living a scholarly life. Now it's time for him to toss aside his books and head to Peru for an all-new time-twisting adventure involving powerful relics that could alter the destiny of mankind!

Join Alabama and his girlfriend, Anastasia, as they hunt for the elusive Crystals of Fortune using the Amulet of Time. Jump back and forth between the past and the present to solve mind-bending puzzles, search for cleverly hidden objects and stop a shadowy nemesis from finding the Crystals first!