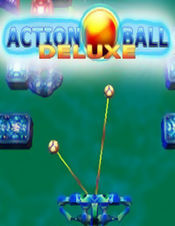 Your mission in Action Ball is to clear blocks off the screen using a ball and a paddle. Although straightforward, you will also face a legion of robots who will do their best to foil your attempts. A supply of special bonuses not seen in other Breakout games turns the tide of battle in your favor, however, including a dazzling multi-missile attack that destroys every robot on the display. Other features unique to Action Ball include stadium-shaped game boards and ten special blocks that can transform the layout of a level before your very eyes. Rounding out this package are outstanding 3D graphics and sound effects that beg to be played loud.